Day in the Life- Never Missing a Beat

Day in the Life of Kitchen Tune-Up Franchise Owners, Terry and Cheryl Wojcickij

Terry Wojcickij retired in the spring of 2019 but quickly grew restless so he and his wife, Cheryl, began looking into franchising. They looked at dozens and dozens of franchise brands and were not able to find the right fit until they finally attended a presentation by Kitchen Tune-Up’s President, Heidi Morrissey. Within 2 minutes, they knew they had found the perfect opportunity and Terry took on the role of Franchise Owner after 38 years in the automotive industry.

This ability to smoothly transition between tasks and projects is something Terry and Cheryl take to their Kitchen Tune-Up schedule every day. A day in the life of a franchisee is packed with different duties and Kitchen Tune-Up owners wear a lot of hats. Each day, Terry and Cheryl are happy to slide between wildly varying positions, everything from taking sales calls to leading team management meetings.

The Wojcickijs are also planning for the future, a little bit each day. Their Kitchen Tune-Up began small, but thanks to their determination and love of their Port Huron community, they are constantly expanding. Retail space and double the remodeling workload is not far off.

Terry and Cheryl love the flexibility their franchise affords them. Every day they set their own schedule, and their overall Kitchen Tune-Up plans are malleable enough to fit their changing needs. What started off as a simple 5-year plan to build up a business and sell it to their children has now changed into a 10-year plan. Not because the going is slow, but because the Kitchen Tune-Up business clicked so well with the Wojcickijs that they want to keep going!

Terry and Cheryl aren’t the first Tunies to find Kitchen Tune-Up and the freedom of self-employment after years of working for someone else. Other Kitchen Tune-Up team members like Jessica Winters also left traditional industries for the opportunity to create something real for themselves.

To see how Cheryl and Terry have kicked off this new chapter in their lives, check out the completed kitchen projects on their website. 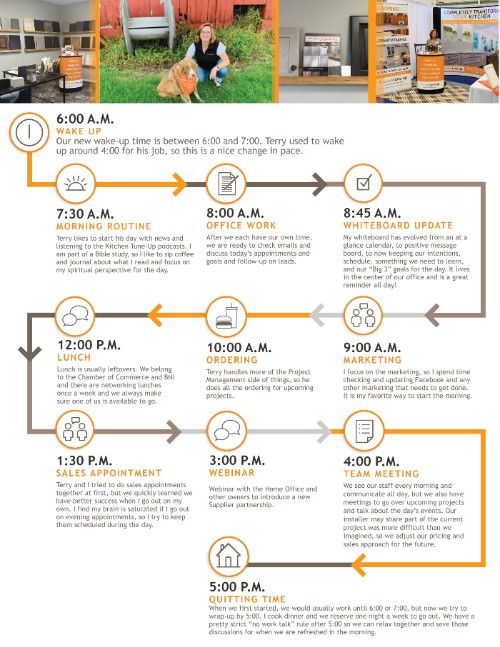