Marco de Wit joined the Kitchen Tune-Up fold by buying an existing franchise from the owner. De Wit was a banquet manager who had been investigating business opportunities for a year when he came across Kitchen Tune-Up.

“After meeting the owner, I was sold,” de Wit says. The Las Vegas location’s owner, Paul Climer, joined Kitchen Tune-Up in 2008, and his timing in selling the franchise in 2020 was just right for de Wit.

Buying an existing franchise has its benefits. de Wit notes that he’s fortunate to have Climer holding down the fort at the franchise while de Wit has been getting Tunie training done.

One of the greatest pluses has been “support from other franchise owners and corporate” as he has learned about Kitchen Tune-Up, de Wit says.

de Wit paints this picture of one recent day in his life as a Tunie, when he was taking Kitchen Tune-Up’s intensive training for new owners. He gets up by 5:00 a.m. and drinks coffee while he reads email and checks social media. “I’m a news junkie and will check that too,” he notes. Then he hops online to start training, checking his email and making calls during breaks. After class, he contacts Climer to see how things are going at the business. Dinner and homework, plus more email, take him up to bedtime at 9.

de Wit has lived in Las Vegas for more than 20 years. His wife helps children with special needs through the school district. de Wit describes their two teenagers as “energetic” but adds that three other family members are even friskier—their three dogs. Both their son, 17, and daughter, 13, are “serious hoopers” and the family spends most of its time around the basketball court.

Cooking is one of de Wit’s favorite hobbies. He combines that interest with his love of fine art, bringing both his visual sense and his personal love of cooking to his work with Kitchen Tune-Up. “Combining these interests lets me help people create their own dream kitchens,” de Wit says. 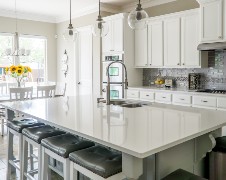 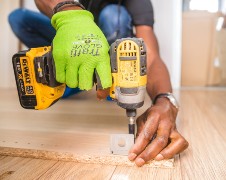